In line with the OXO philosophy of Universal Design, I set out to create three separate immersion blender models in an attempt to find the most intuitive, ergonomic design direction. I wanted users to be able to operate the device with one hand, easily use the device regardless of whether they were right or left hand dominant, and be able to understand the UI without any extra explanation. Based on the project specifications, I also made a point to keep the device about one pound and one foot with variable speed controls, viscosity detection and a monochromatic digital display. 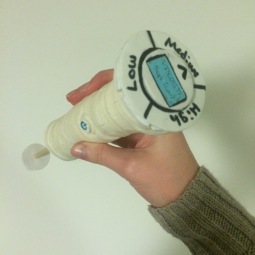 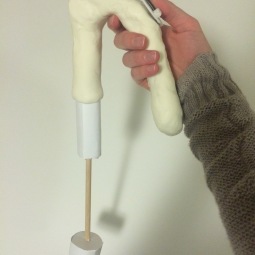 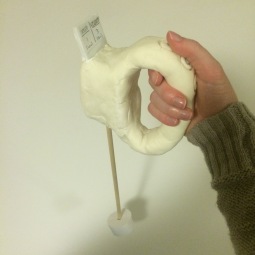 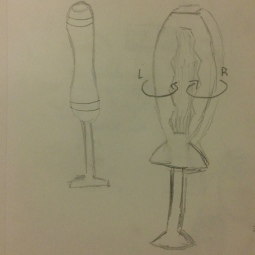 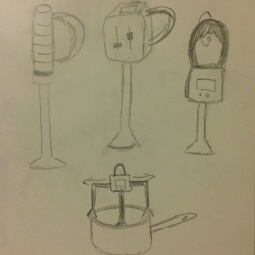 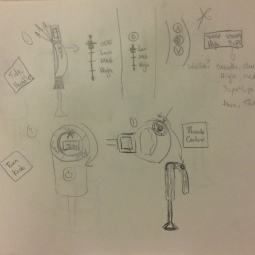 To create my prototypes, I used a combination of cardboard supports, foam, paper, tape, wooden dowels and air-drying clay. Each model featured a wooden dowel and taped paper dome as a detachable chopping blade. However, handle creation varied based on button characteristics and overall shape.

Due to the simple nature of the straight handle, I was able to create my first model by stacking three cylinders of clay, blending them together and piercing them with a wooden dowel before they dried. To improve the grip, I rolled the clay handle along the edge of a table to create slight indentations. Opportunely, this formed a shelf at the top of the tube that could rest on the top of a hand and prevent slippage. By pushing a small cap into the clay, I was also able to create the on/off button. I drew on the associated symbol once the clay had dried and cracked naturally. 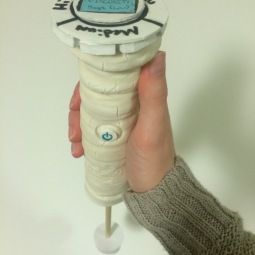 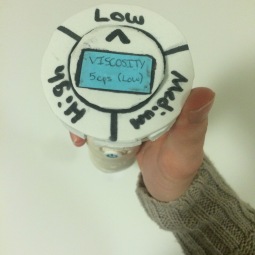 For the speed controls, I used two foam circles that were stacked on top of each other and pierced through with an unfolded paper clip. The larger, bottom circle spins freely to adjust speed, while the smaller, top circle stays in place to display viscosity readouts. Because I wanted to test ergonomics more than UI, I simply made a static digital display as a place holder using paper and pen.

Surprisingly, the clay I used was strong enough to hold this shape without cardboard supports. Although, I wouldn’t go stress testing it by throwing it across the room anytime soon. After making and holding this shape, I decided that looking straight down at the screen from above was awkward for a short user like myself. Accordingly, I pressed a rectangular piece of foam into the clay to create a slightly angled digital display. Finally, I used the rim of a small cap to press three buttons into the clay for on/off, increase speed and decrease speed. 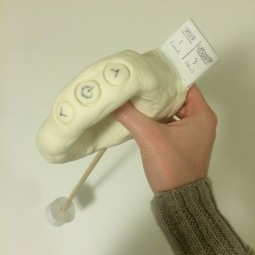 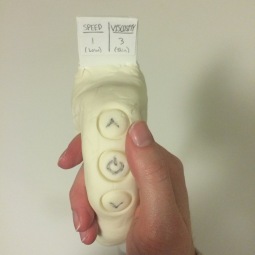 This design was the most complicated to make. I wanted to wrap the prototype in the same white clay as the other models to allow for a more direct comparison durring user testing. Unfortunately, I wasn’t sure how solid the purely clay handle would be once it dried. To ensure that the model didn’t break in half during testing, I rolled up a piece of thin cardboard and used it as a support. In the end, I also taped this cardboard to a strip of craft foam so that I could easily pierce the wooden dowel and a large button piece through it. The entire structure was then covered in white clay and set to dry overnight.

Similar to the control on the straight handle model, I used a foam circle (this time much smaller) as a spinning piece for the speed control. Pushing the fidelity of the model ever so slightly, I placed a button piece from my store of Arduino accessories into the middle. I was interested to see if the click in, click out feedback would be an effective power mode indicator for the user and if it could be easily pressed while simultaneously holding on to the handle. 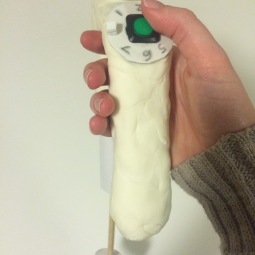 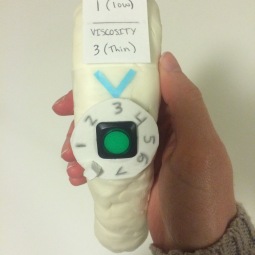 To test these three models, I ran a short user test with my roommate, May, in the kitchen of our apartment. After debriefing her about the nature of the test, I had her stand at the stove and pretend that she was stirring a pot of soup with an immersion blender. With each model, I had her show me how she would turn the device on, increase the speed, lower the speed, and turn the device off. I then had her talk through how the device felt in her hand, what she liked and what she didn’t like. I ended the test by having her compare the three devices and explain which features were her favorite. Though she was free to mix and match features to form her ideal immersion blender, she ultimately decided that she liked the closed, curved handle design the best.

Additional feedback is as follows

Overall, I think that the air-drying clay worked very well for this modeling exercise. It allowed me to make free-form shapes and easily adjust them on the fly. The only downside is that the clay dries quickly if left in small pieces. It also begins to crack if not properly scored, smoothed and moisturized. For my particular purposes, the unintentional cracked texture didn’t significantly affect the integrity of the first impressions user test. That being said, if I was trying to make a sleek, polished prototype, this clay would cause notable problems. Similarly, my current models may begin to crumble as their cores harden over the next few days.

On a different note, while the realistic push button that I used in the third prototype was arguably unnecessary for a low fidelity model, it seemed to give my test participant a much stronger understanding of their ability to use the device. Clay buttons can convey position, but not how hard the user will need to press to activate a device. In the future, I would consider using more realistic buttons in each of the three designs.